Drugs, Sex & Gender: Why One Prescription Doesn’t Fit All

Issy Good explores how sex can be overlooked in science and what the subsequent consequences might be.

Researchers have recently explored and identified the different ways that men and women react to drugs. However, little consideration is taken regarding sex when it comes down to prescribing drugs and treatment course, and this extends to prescription education.

Increasing evidence is coming to light indicating a sex-based discrepancy in the efficacy of pharmaceuticals.This can be traced to historical, social and biological problems with the medical models currently used. Instances include the 2013 warnings issued by the Federal Drugs Agency (FDA) regarding Zolpidem, an active ingredient in many medications used to treat insomnia. Zolpidem was problematic for women because it appeared to be retained in their system for longer.This not only meant that female users of the drug were waking up tired, but also that male users were being disproportionately affected.This same discrepancy was witnessed between 1997 and 2000 when eight of the 10 prescription drugs withdrawn from the US market posed greater health risks to women than to men.

However, sex-related discrepancies are not limited to pharmaceuticals; our approach to gender and sex in general healthcare can be considered as problematic. Despite notable improvements in recent decades to the rights of women and those of non-binary genders, the criteria for diagnosis of health conditions, the drugs we use and much of our accepted knowledge comes from an overwhelmingly cisgendered and patriarchal society.

It wasn’t until 1993, when the National Institute of Health (NIH) revised their guidelines on clinical trials, that the inclusion of women and minorities as trial subjects became mandatory. Before this point, women were often excluded from trials due to hormone fluctuations, which meant they were considered harder to test in drug trials; this led to the under-representation of females in science. The ways in which the different sexes were affected by drugs developed and tested prior to this mandate were often not considered.

The stark reality of this situation is that the changes towards equality in clinical trials are only applicable to NIH-funded developments. Privately funded drug trials are under no obligation to include women, non-binaries or minorities.This leads to information about the differing effects of drugs on men and women being unaccounted for.

Dr Elizabeth Pollitzer, director and co-founder of Portia, an organisation which focuses on gender equality within STEM (science, technology, engineering and mathematics) subjects and promoting gender-sensitive research, points out that there is an “underlying systemic cultural issue” with how pharmaceuticals are trialled and used, which encompasses “the belief that in order to be excellent science must be gender neutral”. Unfortunately, there is little to no acknowledgement or exploration of sex-based discrepancies in drug reactions and efficacy as part of medical school teaching.

Though scientific research aims to eliminate sex bias, Pollitzer highlights that these bias-elimination techniques often do not result in gender neutral science because of a much larger societal and historical problem.“Science has more evidence for males/men than for females/ women because of the historical tendency of researchers to a) use male subjects; b) not collect or analyse data by sex; c) under-report or fail to report results segregated by sex.” This, consequently, diminishes the quality and impact of research. It also means that the resulting scientific knowledge is not truly gender neutral, and an assumption otherwise is incorrect and potentially dangerous.

Instead of assuming that sex is neutral within research, science should recognise sex differences from a variety of perspectives. Physiological and biological perspectives include disparities between drug reactions and metabolism in different sexes.An interesting discussion regarding molecular differences between sexes and the consideration of the sex of a cell exists, with Pollitzer pointing out that “some researchers have suggested that the root cause may be the imbalance in the X chromo-some complement”. Ultimately, as medical professionals it is important to consider the societal, historical and physiological differences between patients, and this includes the impact sex has on pharmaceutical trials and treatment availability/course duration.

Mounting research about the differences between how men and women experience heart attacks further shows that the disproportionate focus on sex is not only a problem for pharmaceuticals. Men more commonly report a crushing sensation of the chest while women seem to report a general feeling of unease before a heart attack.The former is an identifying symptom for clinicians and common knowledge within society, but if the latter is not commonly identified as a symptom for heart attacks, does it mean that these women are being overlooked? It is therefore important to consider how sex could be affecting the presentation of symptoms and in turn how this impacts on the demographic of certain diseases. Pollitzer acknowledges that “for many diseases and health conditions how they present and progress can differ significantly between women and men in a way that cannot be linked to hormones alone, or age, or environmental factors…. this raises concerns for the quality of diagnosis and the effectiveness of treatment”. When questioning why one sex may have higher instances of diseases, the enforcement of biased criteria for diagnosis may contribute to clinicians being more likely to diagnose one sex rather than the other.

There is a difference between the efficacy of drugs on men and women, and perhaps there is a wider problem with how sex and gender are viewed in medicine. It is important to move away from “bikini medicine” where women’s health is only taught around reproductive organs; we need to start looking at both sexes as individuals with differing needs and characteristics which must be considered and ad- dressed at every stage of healthcare planning. For good science and good medicine there is a requirement to become increasingly aware of the sex dependent discrepancies in all aspects of medicine, including the efficacy of drugs and their overall safety.

We are now seeing that some drugs have different actions and side effects across different sexes, what would you say is the initial cause of this problem?

Indeed, this evidence is growing, and is persuasive: of the 10 prescription drugs withdrawn from the market in the USA between 1997 and 2000, eight were more dangerous to women than to men.  The evidence comes mainly from epidemiological studies but it should be linked to understanding of sex-gender-based differences in pharmacokinetics. For example, a range of physiological parameters that differ between men and women can influence drug distribution, e.g. plasma volume, body mass index, body fat, and plasma proteins.  Metabolic profiles of women and men differ, so metabolism may also play a role. There are differences between women and men with respect to renal drug clearance as a result of differences in blood flow, filtration and secretion.  The interesting question is what are the underlying female-male differences at molecular and physiological level that produce these effects. Some researchers have suggested that the root cause may be the imbalance in the X chromosome complement: men have one X but women have two of which one functions fully and the other in part, since it turns out the second X does not shut down fully as suggested by the theory. We need to be aware of important gaps in understanding sex-dependent metabolism and toxicity of xenobiotics because the commonly used rat model is not an accurate model for the prediction of sex-dependent differences in humans.  Recently, interest has been growing in creating organ-on-the-chip platforms for testing toxicity of drugs, which can include liver, kidney etc. cells but, worryingly, the role of cell sex as component of efficacy of pharmacokinetic response has not been addressed, even though there is enough evidence to show that cell sex does matter.

Is the gendered nature of pharmaceuticals a problem that permeates across science in general? Is this problem just a microcosm of the problem that we see with gender in the scientific field?

I think that there is an underlying systemic cultural issue, namely the belief that in order to be ‘excellent’ science must be ‘gender neutral’.  But this assumption has been shown to be an illusion that hides the fact that science has more evidence for males/men than for females/women because of the historical tendency of researchers to: (A) use male subjects; (B) not collect or analyse data by sex; (C) underreport or failing to report results segregated by sex.  When this happens, the quality of the knowledge and impact of the research is much diminished, as it can skew meta-analytical studies and systematic reviews.

How does this problem manifest itself? Could it be a cause for the gender differences we see in the prevalence of certain diseases?

It has been shown for many diseases and health conditions that how they present and progress can differ significantly between women and men, in way that cannot be linked to hormones alone, or to age, or to environmental factors.  Cardiovascular diseases are a good example, as are autoimmune diseases, and cancer.  This raises concerns for over quality of diagnosis and effectiveness of treatment. Pain, transplantation, stem cells therapy, reproductive health, applications of ionising radiation in health, medical diagnostic devices, biomarkers, vaccination strategies, toxicity of drugs, iatrogenic injuries, cardiovascular disease diagnosis: these are all examples of health measures where sex and/or gender are important determinants of outcomes.  On the whole, when it is (incorrectly) assumed that what works for men will equally work for women (e.g. protective effects of aspirin), and vice versa (e.g. breast cancer therapy), the outcomes will not be optimal, for women or for men.

How can we start to remedy this gendered drug problem?

We need to: (A) abandon the ‘gender neutral’ assumption; (B) challenge quality of available knowledge for potential gender bias and correct it by including systematic sex-gender analysis in study design; (C) with ‘big data’ technologies we will be able to use all the ‘omics to create molecular models of drug effects and toxicity (this should be cheaper than writing off the billions lost when drugs must be withdrawn from the market); (D) raise awareness and involve the public, women and men, in asking health practitioners questions about the drugs they take (have they been tested on representative numbers of women and men, for example); (E) apply ethical arguments regarding consequences of ‘gender-biased’ quality assessment of drugs; (F) train students and researchers to be more sensitive to sex/gender-dependent differences in drug efficiency and safety.

The RUMS Review is a termly publication serving the students, staff and alumni of University College London Medical School. We strive to inform, inspire and intrigue our readers with original interviews and content; including articles, book reviews, perspectives, research, and career reports. View all posts by RUMS Review 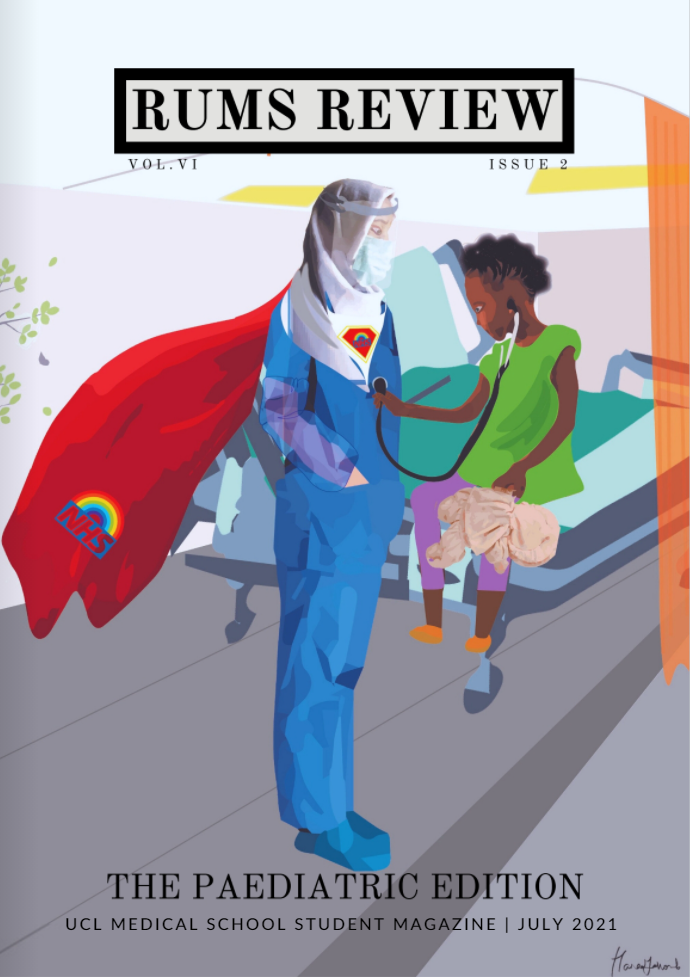 Proudly sponsored by The MDU

Proudly sponsored by The BMA

Proudly sponsored by The HCSA